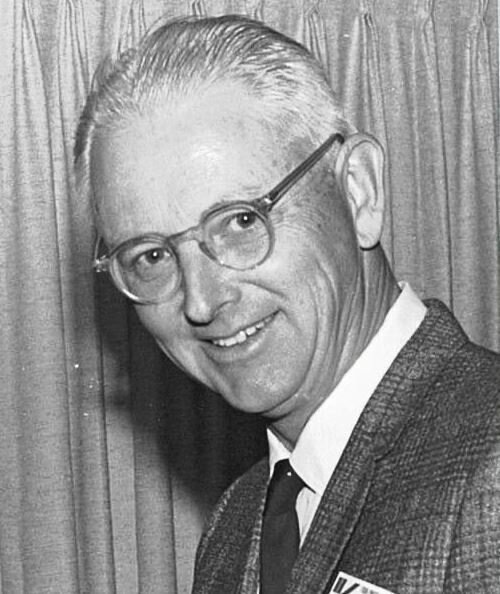 Frederick H. Matteson was born in Bad Axe, Michigan July 22, 1925 to Dr. and Mrs. Harold Matteson (mother’s maiden name, E. Mildred Matson). He grew up in Ann Arbor and Flint, Ml, where his father practiced oral surgery. He attended schools in Michigan, Florida, Illinois and graduated from High School in Kokomo. Indiana. He enlisted in the Navy and was enrolled in the V-12 Officer Training Program, at Norman, OK. and Atlanta, GA. He was commissioned an Ensign as an aviation officer and received a Bachelor’s degree in Aeronautical Engineering from the Georgia School of Technology in 1946. He worked as a Research Scientist for the National Advisory Committee for Aeronautics at Moffett Field until 1954. He earned a M.S. degree in Mechanical Engineering from Stanford University in 1949. He was sent to Wiesbaden, Germany where he served as Aircraft Branch Chief and later Assistant Chief of the Aircraft and Accessories Division, Hq. Air Material Force Europe. He served on a NATO subcommittee and advised various NATO countries. In 1956 he joined Hiller Helicopters and served as the Flight Test Aerodynamicist on the X-18 program at Edwards Air Force Base and developed stability augmentation systems for various helicopters. His design for a 4-engined Tri-service transport was chosen and built as the XC 142A, the first 4¬engined transport to fly from an aircraft carrier. He left the Fairchild-Hiller Corporation as Chief Aerodynamicist.

He then became a co-founder of Aerostructures, Inc. and served as Chief Aerodynamicist until he retired. During the Vietnam War he was asked to teach at San Jose State University in the Aeronautics Department. In 1974 he was awarded a Doctor of Philosophy degree in Industrial Engineering from Stanford University. He moved to Hollister, CA and worked part-time as a consulting engineer and as a designer of agricultural aircraft and equipment for Weatherly Aviation. He and John Weatherly designed and built a controllable variable-pitch windmill drive for spray pumps that found application worldwide.

Fred was a lifelong cyclist, having traveled through many states and countries on his bikes, and continued to use the bike for exercise and running errands. He designed and built bikes and wrote articles on bicycle design. He was a pilot of airplanes, helicopters, and sailplanes. He designed, built and flew his own sailplanes and assisted designers of various other sailplanes, wrote papers on sailplane design, and was an author of the American Soaring Handbook. He was a member of the American team to world soaring championships in Poland and England. He did research on aviation safety and accident analysis, and served as an expert witness in accident investigations. He loved music and enjoyed composition.

Services will be private